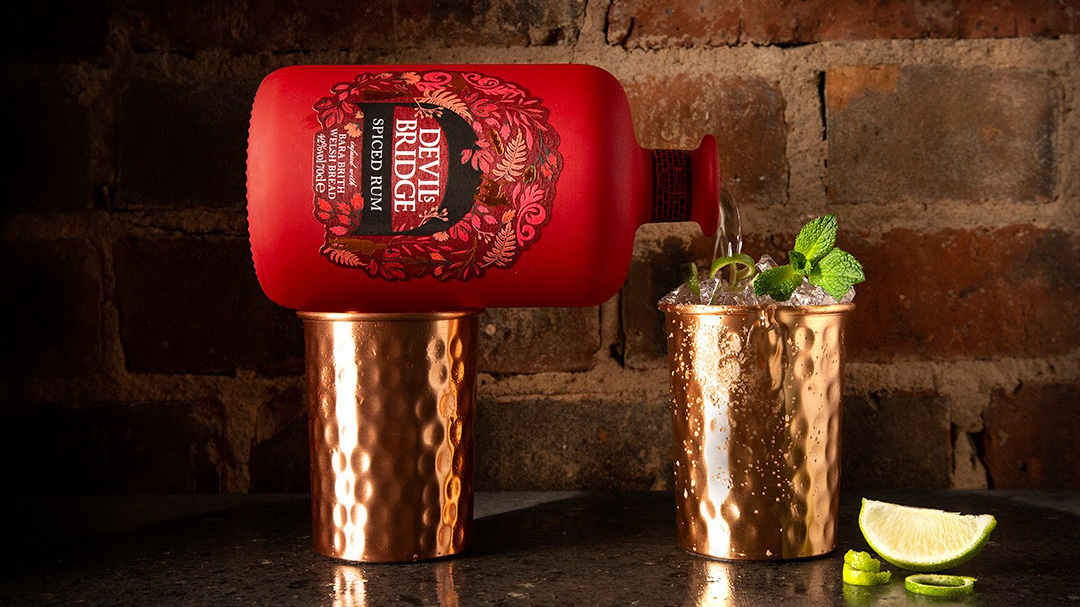 Devil’s Bridge rum celebrates Wales. While that might seem like a foreign idea to those who associate the sugarcane liquor with the Caribbean and other sun soaked destinations, the Cardiff-based brand was determined to do so from the start, says owner Gregor Shaw. Now, just months after launch, the rum has already picked up a slew of awards, while managing to keep to its initial goal.

To create a rum with real Welsh character, Devil’s Bridge looked to a trio of ingredients closely associated with the country: Barra Brith (a type of tea bread), Glengettie Black Tea, and Shirgar Butter. While many of the other ingredients remain secret, it’s this trio that gives it is unique, award-winning character.

In this week’s Bottle Breakdown, we sat down with Gregor Shaw to dig deeper into Devil’s Bridge Rum, learn about the origin of the name, and find out what’s next for the Welsh brand.

Spirited Zine: Just to start, can you tell us about your first experience with rum and how that motivated you to make your own?

Gregor Shaw: This might sound odd coming from a professional rum maker but my very first experience with the spirit, aged about 18, was not a good one. A friend brought a bottle of Greek rum home from holiday and suffice to say I went a bit overboard. It was years until I could look at a bottle of rum again. Happily, the premium rum we’re making at Devil’s Bridge today is complex and contemporary – it bears no resemblance to that of my youth.

SZ: Can you tell us a short version of the tale of Devil’s Bridge and how that inspired you to make a rum named after it?

My co-founder, Robin, was inspired by the story of the Devil’s Bridge – a legendary tale of Welsh spirit, based in the Cambrian Mountains near Aberystwyth involving the devil, a maiden and her dog. Our rum is as Welsh as the story of Devil’s Bridge and as fiery as the woman who tricked the Devil. Taking the metaphor one step further, this Welsh legend has inspired our visual branding as much as the creation of the rum itself. More of that later.

SZ: Devil’s Bridge Rum blends Caribbean rums with Welsh ingredients, Bara Brith, Glengettie Black Tea and Shirgar Butter. Where did the idea to combine all these ingredients come from?

Celebrating Wales was a priority from the start so Devil’s Bridge was always going to include fine Welsh ingredients. None of the three founders can now remember whose idea it was to infuse the rum with the quintessentially Welsh Barra Brith (a type of tea bread) but certainly, it came about after a lot of thought and experimentation. Once we’d nailed the idea down and knew it would work, the addition of Welsh tea and butter, which are the usual pairings with Barra Brith, made perfect sense.

SZ: Can you take us through the process of creating Devil’s Bridge Rum and all of the different ingredients that go into it?

We certainly aren’t about to give away our recipe. But alongside those carefully curated Welsh ingredients, the rum has a plethora of fruits and spices in it such as cardamom, mixed spice and vanilla. Just as important as what’s in the bottle though, is the bottle itself. We are so lucky to have a world-class Welsh designer on board whose striking matt red bottle design complete with subtle copper accents is every bit the look and feel of a bottle we aspired to put our wonderful elixir in.

SZ: Why was it important for you to distill Devil’s Bridge Rum to 42% ABV?

OK so here goes the science bit – the chemistry geeks and fellow distillers amongst your readers will know that 42% ABV is the optimal alcoholic strength required to bring out the best of a rum’s additional botanicals and spices. We love how the 42% Devil’s Bridge facilitates that gentle hint of cardamom, a touch of vanilla and warming mixed spice on the finish; all these notes are optimised at 42% ABV.

SZ: Your rum has already taken home gold medals at some top awards at major spirits competitions. How did picking up those trophies feel and how has it inspired you for the future?

I cannot lie – we were utterly blown away to receive three golds and a bronze at the 2021 spirits awards season. Those accolades, along with the judges’ comments just months after launch really gave us a new level of confidence. Of course we believed in Devil’s Bridge from day one but to have that formal recognition from awarding bodies and comments from top flight judges immersed in the global spirits scene day in day out is beyond our wildest dreams. Specifically, the awards we took home are: two golds from the World Rum Awards, gold from the London Spirits Competition and bronze from the International Spirits Awards.

SZ: What’s your favorite way to enjoy Devil’s Bridge Rum? Are you making any cocktails with it that you might recommend?

Devil’s Bridge was deliberately designed to stand up on its own. We always had in mind to design a premium rum, smooth enough and nuanced enough to be sipped straight, and the awards we have won are testament to our achieving that goal. That said, we couldn’t ignore the fact that 95% of rums are mixed with cola or ginger ale so Devil’s Bridge was also created to go well with mixers. On that very note, one of the judge’s comments was that it was the perfect foil for cola.

When it comes to cocktails, we’re constantly developing seasonal recipes. Right now, we’re giving our take on the classics with new recipes for long and refreshing summery drinks such as the Mai Tai, Cuba Libre and a Devil’s Bridge Mojito. This summer we’re posting new cocktail inspiration every Thursday on Instagram and your readers can find the corresponding recipes on our website around the same time.

SZ: In less than a year, you’ve managed to make a name for your brand and lovely rum. But what’s next for you and Devil’s Bridge?

We launched Devil’s Bridge when the world was shut down. So our next move is to really grow the on- and off-trade that hasn’t been available to us so far because of lockdown. With a clutch of awards and robust sales growth month on month, we are excited and  more than ready to tell the world about Devil’s Bridge.