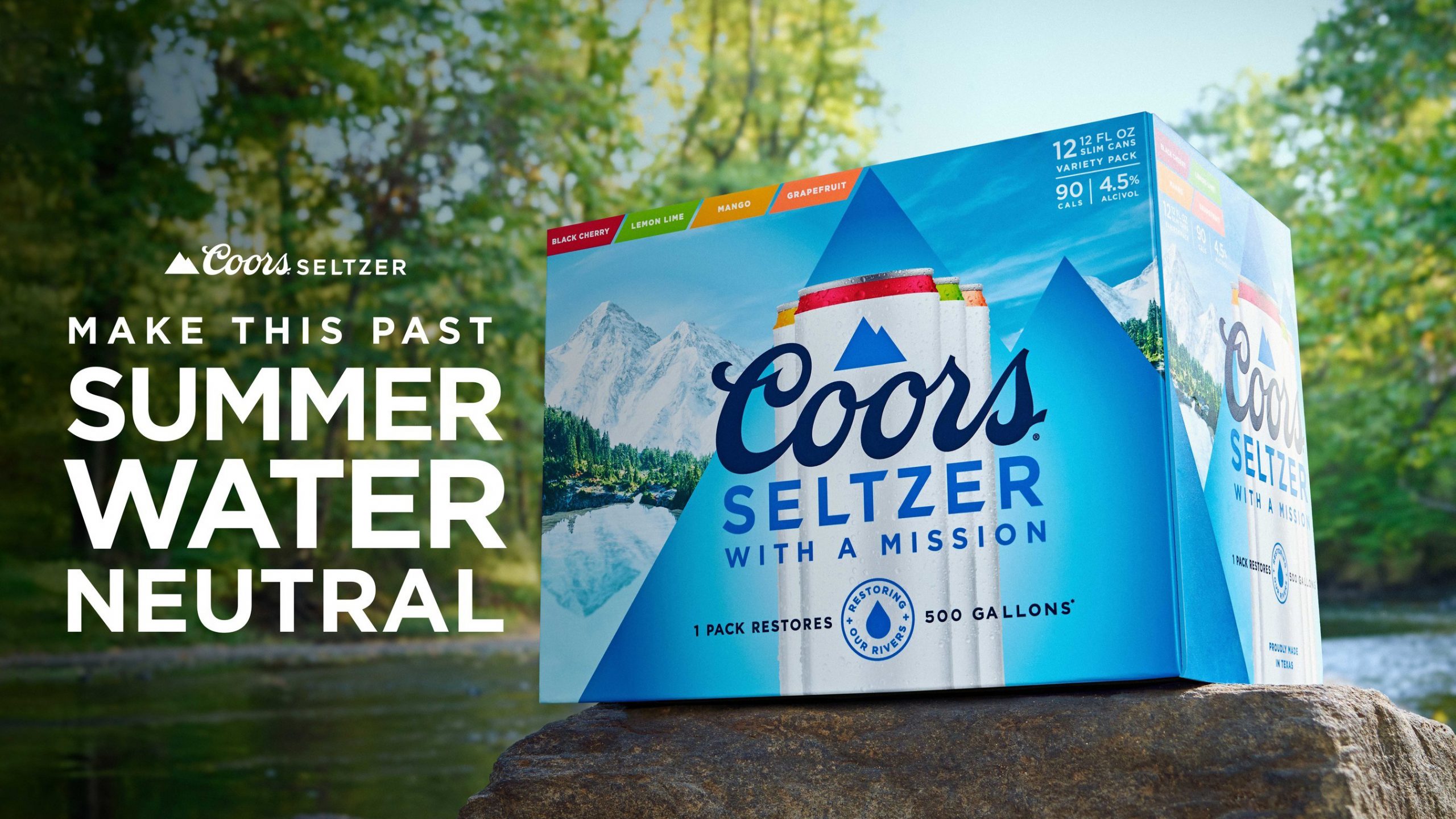 Molson Coors has announced the official launch of Coors Seltzer. The new hard seltzer was crafted with a mission to help save America’s rivers, with every 12-pack sold restoring 500 gallons of water, including a commitment to restoring at least one billion gallons during the first year.

In order to accomplish this goal, Coors is partnering with Change the Course, a program that specializes in helping its partners implement water restoration and conservation programs. The Change the Course partnership works by scoping, vetting and funding a portfolio of on-the-ground water projects that help sustain healthy, flowing rivers. Coors Seltzer and Change the Course will first target 16 iconic river basins within 14 states, including projects for the Colorado, Missouri, Sacramento, and Chicago Rivers. Supported projects are focused on modernizing irrigation, enhancing in stream flows, removing barriers, reducing pollution, and restoring fish and wildlife habitat.

To celebrate the launch of Coors Seltzer, the brand plans to make an impact. This past summer, America drank 87 million gallons of hard seltzer, but most of that drinking didn’t do much good–not that we don’t think having a good time with your favorite RTD isn’t an excellent way to spend your day. So, Coors Seltzer is going to help get America’s hard seltzer craze to “water neutral” by footing the bill on 175,000 12-packs to restore all of that hard seltzer volume consumed.

All drinkers need to do in order to neutralize their summer of hard seltzer consumption is to join the Coors Seltzer Volunteer Program and consumers in select states will be offered a rebate to get their first 12-pack for free – they drink, Coors Seltzer gets to work. That’s right, just by drinking Coors Seltzer, you’re volunteering to save the rivers. Rebate value varies by state (full price in certain states, 50 percent price in other states, and is void where prohibited).

“Americans are drinking an astounding amount of hard seltzer, but it’s not doing much good. With the launch of Coors Seltzer and its Volunteer Program, we’re setting out to provide a seltzer that tastes good and also gives drinkers an opportunity to do good with each and every sip,” said Matt Escalante, Molson Coors’ senior director of above premium flavors.

When drinkers buy the new seltzer, they help restore 500 gallons of water into America’s rivers. It’s that simple.

“Rivers are the lifeblood of America. They provide clean drinking water, deliver vast economic value to communities and businesses, support critical fish and wildlife habitat and recreation in every state. Unfortunately, the iconic river basins that fuel our communities, economies and ecosystems are stressed,” said Todd Reeve, CEO of Bonneville Environmental Foundation and co-creator of Change the Course. “We’re thrilled to partner with Coors Seltzer to build awareness of America’s incredible rivers and ensure that high-impact projects across the country keep our rivers clean and healthy.”

Starting Wednesday, October 7, Coors is encouraging fans 21 and up to get their volunteer journey started through the Coors Seltzer Volunteer Social Sweepstakes:

Coors Seltzer Volunteer Social Sweepstakes official rules are located here. Fans can also begin registering today on CoorsSeltzer.com/Volunteer. And coming soon, volunteers will be able to log how many packs they’ve bought in order to track how much they’ve volunteered to save America’s rivers. The more Coors Seltzers they buy, the more prestigious the volunteer recognition!

“If you want to change something in the world, you can’t ask people to change their lives to provoke that change,” said Paco Conde, founder, partner and creative lead at Activista, the agency who developed the creative for Coors Seltzer. “The most effective way to engage and inspire people is to leverage something they are already doing and pivot that action into a helping act. That’s the idea behind the Coors Seltzer Volunteer Program.”

The Seltzer is currently available nationwide and comes in four flavors: Black Cherry, Mango, Grapefruit, and Lemon Lime. The hard seltzer comes in a variety pack of twelve 12-ounce slim cans, and standalone 16-ounce and 24-ounce single cans of Black Cherry. Each 12-ounce can of Coors Seltzer contains 90 calories, is certified gluten free, and contains 4.5 percent alcohol by volume.