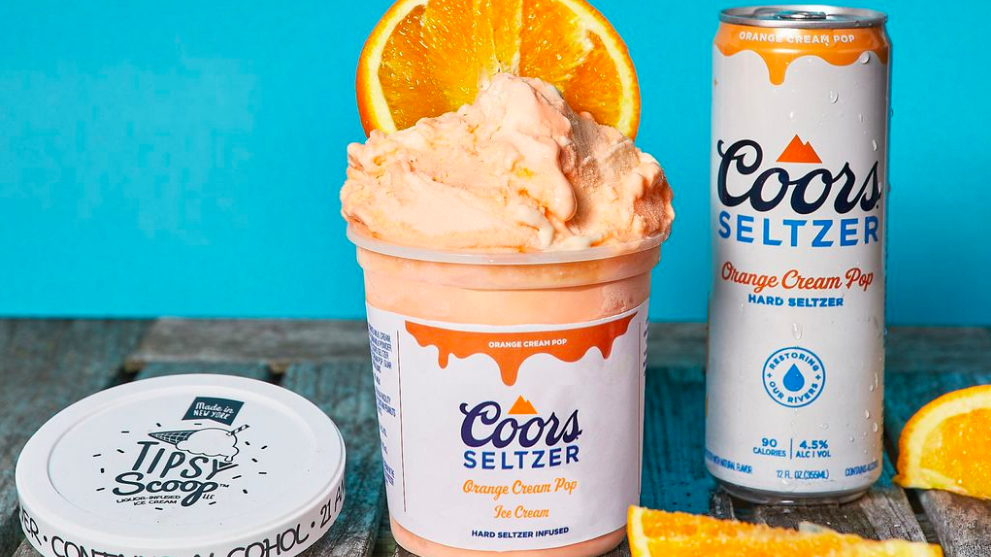 If you love Coors and have equal affection for ice cream your wildest dreams are about to come true. Coors Seltzer is about to deliver the Coors Seltzer Orange Cream Pop – a booze-infused ice cream that will make your summer a little bit cooler.

The innovative frozen treat is the result of a collaboration between Coors and frozen dessert company Tipsy Scoop.

Coors will be dishing out pints of the Orange Cream Pop Seltzer-spiked boozy ice cream for a limited time at “Barlour” locations across New York City.

Don’t disappear if you’re not in NYC this summer.  The pints will be available in four-packs, costing US$49 all across the remaining United States.

With a 5% ABV the Orange Cream Soda ice cream will have a sizable kick.

If you’re looking to give the ice cream a try, head over to Coors’ official website.

Vice president of U.S. value brands at Anheuser-Busch, Daniel Blake, dubbed the pops as “one of the most unique Natty innovations to date.” The boozy ice pops hit stores back in April, with availability ranging across the United States.

Back in October, Coors announced the official launch of Coors Seltzer. The hard seltzer was crafted with a mission to help save America’s rivers, with every 12-pack sold restoring 500 gallons of water, including a commitment to restoring at least one billion gallons during the first year.

In order to accomplish this goal, Coors partnered with Change the Course, a program that specializes in helping its partners implement water restoration and conservation programs. The Change the Course partnership works by scoping, vetting and funding a portfolio of on-the-ground water projects that help sustain healthy, flowing rivers. Coors Seltzer and Change the Course will first target 16 iconic river basins within 14 states, including projects for the Colorado, Missouri, Sacramento, and Chicago Rivers. Supported projects are focused on modernizing irrigation, enhancing in stream flows, removing barriers, reducing pollution, and restoring fish and wildlife habitat.